‘Nobody Notices a Clean Kitchen, but They Notice a Dirty One!’ 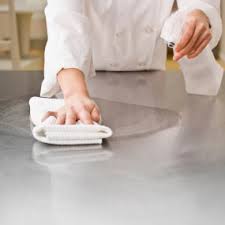 Said adage was told to me by my ever-loving boyfriend, who is currently away in Portugal on his stag ‘do. It was mentioned at, I feel, a crucial point in our relationship. I had just moved into his house and was feeling my way through the delicate, negotiable areas of our new roles, as housewife and head of the household.

Prior to this point, I had merrily cleaned whenever I stayed over for the weekend, enthusiastically waving my cloth or mop at any visiting friends or relatives with all the zeal of a newly-married heroine in a Jane Austen novel, forced by circumstance to settle for a poor, but handsome curate in some remote and godforsaken village.

Now, however, the rules of the game and indeed the playing ground had fundamentally shifted. Was I to forever more be bound by some unspoken law that stated that ‘Women Must Clean’? Could I live with the thought of endlessly hoovering up, week after week, year after bleach-stained year?

Perhaps there was some middle ground, a Third Way, which could offer us a solution. I have until now not presented you with my boyfriend’s view on such matters. His is to pay someone else to do the things you don’t want to do. I say fair enough. The only problem was that at the time we couldn’t afford to. He also did not want to clean and, as he works ungodly hours in the City, I felt mean expecting him to do as much housework as me.

So, we consulted friends to see how their routines worked. Some couples split the tasks up, one half doing all the cooking, the other all the cleaning. Funnily enough, in each case, the woman was the one who did the cleaning. Others simply paid a cleaner, or did the job together on a Saturday morning to ‘get it out of the way’.

In the end we went for a sort-of compromise. I would do the cleaning and cooking, whilst he would do any outdoors work and cook at the weekend. So far, it has worked out alright. Yes, it would be better if he didn’t leave his dirty football clothes/towels/t-shirts on the floor. No, I’m not prepared to promise to ‘obey’ him in all matters, including cleaning, during our wedding ceremony. But nothing’s perfect, right?

At the end of the day, cleaning is not a fun task, but once completed it does make you feel pretty good. In fact, I imagine it is rather like climbing a mountain. You gather the tools, assess the job, and then get started. Half way through you gasp for breath and wonder in dismay at why you ever started. You then force yourself to keep going and reach the summit. With a sigh of relief you survey all that you have achieved and smile, whether it’s your turn to clean or not.

Alice Potter knows that Zoflora gives you a clean kitchen and uses their products religiously!